It's time for Congress and the President to pass the American Families United Act. Our individual small investments are adding up to big results.

Complete this action and make sure to complete the Facebook and Twitter posts to your Representative's and Senators' pages.

How this has paid off: over 2,000 views and 2,000 emails to Representatives and Senators in the first 3 days.

Talk to People in your Community

Print out 750 copies of this flyer (page two is intended for double-sided printing in areas with many Spanish speakers). Here is a smaller version that will print two flyers per page.

Go to a public place, hand them out, and actively ask people to scan the flyer and complete the action on the spot.

Typical investment: up to $90 in printing fees, 6 hours handing our flyers over a couple of weekends. Some people have avoided printing fees by printing just a few flyers, and focusing on longer conversations with people.

How this has paid off: the first co-sponsor of the American Families United Act.

Reach out to the Press

Call your local paper or TV station and ask who covers immigration stories.

Tell them you've got a story and there is a bipartisan bill with public support moving through Congress to help you.

Typical investment: 3 hours to make calls and send text messages over several days, 6 hours if somebody does a story.

How this has paid off: over the years, our members have appeared in stories on CNN, MSNBC, NBC, LA Times, NY Times, and many other news outlets.

Reach out to your Church, Union, or Association

Check the public record to see if your group lobbies on any issues federally.  If they do, share this letter with them to request they formally endorse the American Families United Act.

If they do, find the names of their lobbyists on this same site, and call your group's headquarters to ask for help in lobbying.

Ask your group to write a letter of support for the American Families United Act.

Typical investment: 3 hours of searching, scheduling and finally speaking to the right person.

How this has paid off:

Reach out to your Immigration Lawyer

Send your lawyer this letter and ask them to share the attached flyer with clients who would benefit.

Reach out to your Town, City, or State

Contact your mayor, council member, State Representative, or State Senator and ask them to introduce a proclamation or resolution in support of the American Families United Act.

Typical investment: 3 hours of searching, scheduling, speaking to the right person and sharing a draft resolution.

How this has paid off:

Meet (virtually) with your Representative’s and Senators’ Offices

Sign up to join in with others in your state to take your case directly to decision-makers.

Typical investment: 5 minutes to sign up, 1.5 hours speaking with offices.

How this has paid off: in the first few months of 2021, our members met with more than 180 offices of Senators and Representatives.

Thank Representatives who have co-sponsored the bill and Senators, organizations, or individuals who have pledged their support, by purchasing and mailing a Thank You postcard to their office.

We've also just added a new postcard that can be used to send to Senate offices to ask Senators to support the American Families United Act introduction in the senate.  Find that card here.

Find their addresses on congress.gov. 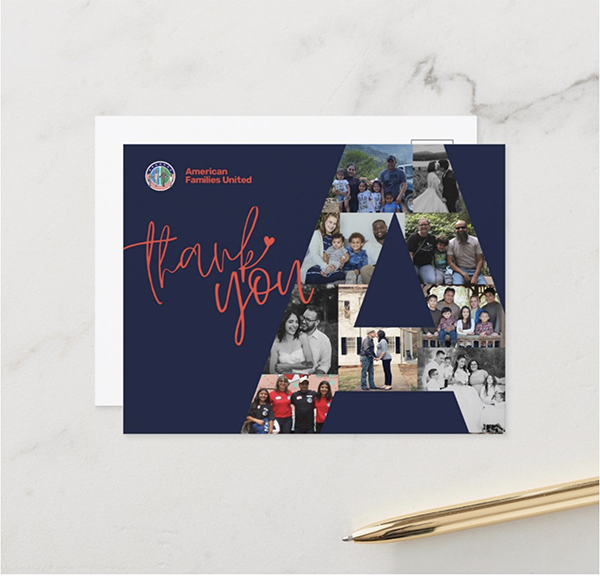 Typical investment: $36 for a pack of 24 postcards (including shipping costs)

Each dot on the map below represents a town where constituents have asked their Senators and Representatives to support the American Families United Act. 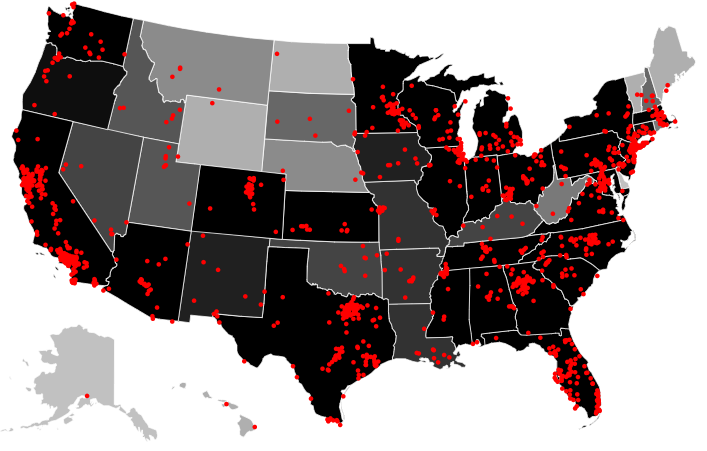